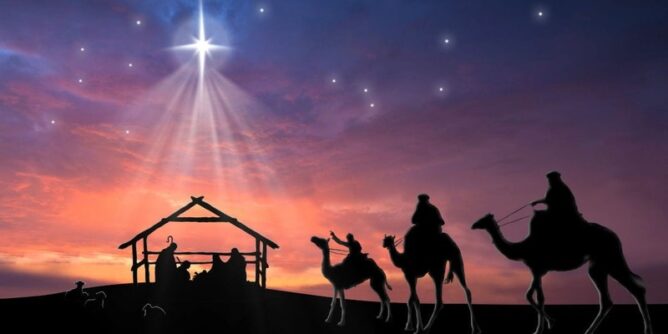 The Story of God and Man at Christmas 2.

This is the third in this series, The Christmas Story – The First Coming of Christ.

The Creation of Man, the being made in God’s exact image and likeness, was thoroughly momentous.  The subsequent Fall of Man was cataclysmic and consequential.  And now, the Coming of Christ, pivotal and far-reaching.  It was from before the foundation of the world and it came just at the right time, in the fullness of the times.  The whole earth was in pain, because sin and death had taken over.  The Seed of a Woman promised in Genesis 3:15 was about ready to manifest, to destroy the works of darkness and restore Mankind back to where it was before the Fall.  That place that Man had was a place of glory, a place of dominion, a place of being just like God in the earth.  ALL FOR HIS GLORY!  HALLELUJAH!

If you think the Birth of Christ was not weighty, think again.  There was so much going on, by so many.  We will be looking at all the events and those involved, so as to magnify and fully appreciate what the Birth of Christ really means and how significant it was.  Today we are going to look at the presence and the engagement of the Holy Spirit throughout the First Coming of Christ.

If you think the Birth of Christ was not weighty, think again.  There was so much going on, by so many.  We will be looking at all the events and those involved, so as to magnify and fully appreciate what the Birth of Christ really means and how significant it was.  Today we are going to look at the presence and the engagement of the Holy Spirit throughout the First Coming of Christ.

All of Heaven was involved with the Coming of Christ.  As to the Holy Spirit, we first must exclaim that He carried out the great assignment of bringing into existence a seed being supernaturally placed into Mary.  Obviously, this wasn’t hard for God to do, He created how babies come in the first place.  We also know The Christ had to come through a woman but He could not come through a man on earth, because of the sin problem the man carries in his seed.  Thus, we see in Luke 1:35, “The Holy Ghost shall come upon thee, and the power of the Highest shall overshadow thee: therefore also that holy thing which shall be born of thee shall be called the Son of God.” Again in Matt. 1:18. “When as his mother Mary was espoused to Joseph, before they came together, she was found with child of the Holy Ghost.” We must acknowledge again, that it was the Seed of a “Woman” and not the simultaneous seed of a man, that was to come to restore everything back after Adam fell (Gen. 3:15).

Given that the Holy Spirit operates the things of God in the earth and nature and people respond when God is present and at work (at creation, or when rocks would otherwise cry out, or when the sun turned dark at the crucifixion, or when a sound filled the whole place in Acts 2), it stands to revelation, that the star that appeared and lit the way for the wise men of the east, to find the Baby, was overseen and directed by the Holy Ghost.  The Holy Spirit was directing things and the things were glorious.

But this is not all.  Here are yet four more times the Holy Spirit was actively engaged in the coming of Christ.

First, we see at the announcement to Zacharias of the birth of John the Baptist, that John “shall be FILLED WITH THE HOLY GHOST, EVEN FROM his mother’s womb” (Luke 1:15).  Next we see that Elisabeth, mother of John the Baptist, was FILLED WITH THE HOLY GHOST, “And it came to pass that when Elisabeth heard the salutation of Mary, the babe leaped in her womb; and Elisabeth was filled with the Holy Ghost” (Luke 1:41).  And if that wasn’t enough, we see that when John the Baptist arrived at birth, Zacharias, his father, was FILLED WITH THE HOLY GHOST and he prophesied and pronounced something huge for all to hear:  “And his father Zacharias was filled with the Holy Ghost, and prophesied” (Luke 1:67).  Finally, we see in Luke 2:25-27, how a very special man, Simeon, was led by the Spirit of God at the consecration of Jesus, “And, behold, there was a man in Jerusalem, whose name was Simeon; and the same man was just and devout, waiting for the consolation of Israel: and the Holy Ghost was upon him. And it was revealed unto him by the Holy Ghost, that he should not see death, before he had seen the Lord’s Christ. And he came by the Spirit into the temple: and when the parents brought in the child Jesus, to do for him after the custom of the law …”.

The Spirit of The Living God was ALL OVER the events of the Birth of Christ, filling and orchestrating so many things.  Jesus and His forerunner, the great John the Baptist, were both coming, to set something into motion the world was long waiting for, the salvation and redemption of all mankind.  This was all huge.  And the Holy Spirit was fully present and so fully active.

Glory to God!  This is so exciting!

Next in the series, we are going to talk about the role of angels at the coming of Christ.  What a role they had to play.  Big time.