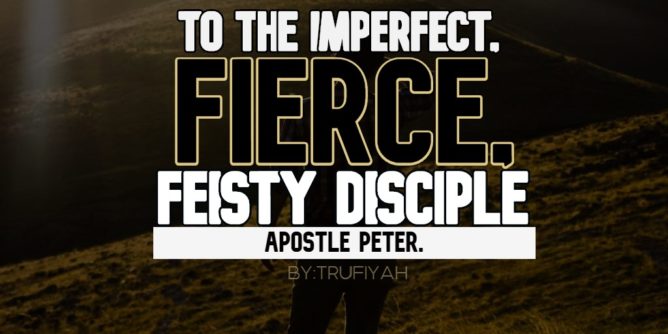 The Apostle Peter was a force to be reckoned with. He was spirited, hot-tempered, fiercely protective, quick to confirm relationship with Jesus, but when the going got tough, he was also quick to deny Him. His revelation of who Christ is was so highly regarded by our King that He said: “You are Peter and upon this Rock, I will build My Church and the gates of hell shall not prevail against it.” (Matthew 16:18

Peter’s life reads like a novel. He was the Apostle of action and excitement. His story is the one that makes us grab our popcorn as we sit on the edge of our seats waiting for the good part. Peter was an integral piece of the miracle of a haul of fish that broke nets and sank boats, he walked on water, was one of the three privileged to sit with Jesus in the Garden of Gethsemane, and he was the one who cut off the ear of a soldier who tried to arrest Jesus. If we were in the early to mid-2000’s, we would say Peter was the Apostle that was truly ‘Bout It, Bout It.’ He didn’t play when it came to anything, especially his call to walk with Jesus and yet in Luke chapter 22, when Jesus needed his support the most, we see the ride or die Apostle denying even knowing Him. It was a sad state of affairs and as far as ministry goes, it certainly was not his finest hour. Yet, in John 21:15-17 we find a most intimate and riveting displaying of Peter’s restoration. Let’s take a peak.

15: So when they had eaten breakfast, Jesus said to Simon Peter, “Simon, son of Jonah, do you love Me more than these?”

And he said to Him, “Lord, You know all things; You know that I love You.”

Jesus said to him, “Feed My sheep.”

What a beautiful display! Jesus asked a simple question, a question He already knew the answer to, and He asked it three times! I believe He did so to combat and overcome the three times Peter denied him. If you take your time and don’t skim over it, it is a heart string pulling, tear-jerking moment of forgiveness that would change the Apostle’s life and ministry forever. Though at times hard to accept, we can wrap our minds around the concept of forgiveness, but we grapple to understand the kind of restoration that can take us from fierce protection of the Gospel to behavior that is a full-blown denial of it, all the way to Acts 22:15,16. It is in the Book of Acts that we see Peter making good on the command of Jesus to feed His lambs. In this book, he and the other Apostles are rigorously working to build the Church; teaching and defending the faith with astounding commitment and authority. Let’s look at verses 14-16;

14: And believers were the more added to the Lord, multitudes both of men and women.

15: Insomuch that they brought forth the sick into the streets, and laid them on beds and couches, that at the least the shadow of Peter passing by might overshadow some of them.

16: There came also a multitude out of the cities round about unto Jerusalem, bringing sick folks, and them which were vexed with unclean spirits: and they were healed every one.

Isn’t it interesting that the Bible speaks of the people hoping specifically that their sick be touched and healed by Peter’s shadow? The same exact way that people were healed by the shadow of Jesus?! Peter wasn’t the only Apostle working and growing the Church, and I am so sure he wasn’t the only one performing miracles. Yet, the Bible makes specific mention of his shadow being a source of hope and healing through which Christ could so powerfully flow. I believe this was on purpose! It is the basis on which I felt compelled to write this article. I believe verse 15 was intentionally placed there for us! For the imperfect, feisty and fierce disciples who have gone river deep, mountain high for Jesus one minute to all out denial of Him the next. I’m not talking about hypocrisy here. We see during His restoration process that Peter’s moment of denial was more a matter of fear mingled with frail humanity than it was a matter of love. Peter loved Jesus! Still, all throughout his appearance in the New Testament we find a series of Peter’s extreme highs and lows. Remember the Apostle Paul in Galatians 2:11-13 having to rebuke Peter to his face for being two-faced when it came to his treatment of the Gentiles when fellow Jews were around? Peter was a trip! Yet, Jesus uses him and uses him powerfully!

I say all this to say that feisty, fierce and imperfect disciples… Disciples like Peter… Disciples like me… are still amazingly useful to Christ if we would just believe it and allow ourselves to be restored. I’m sure before his restoration, Peter felt uncomfortable and unworthy to be in the company of a fully resurrected Jesus. I know I’ve had those moments. I’ve had moments where my behavior has totally missed the mark and defies everything I said I believed and yet Jesus has come back to sit with and restore me every time. I would feel so ashamed and uncomfortable until He’d ask the question; “but do you love Me?” It’s the craziest thing to be loved by God like that when you are so “all over the place” and you know you don’t deserve it! But that’s all of our story, isn’t it? We may not all have tempers or carry switchblades, but we’ve all been that imperfect disciple before. I want to encourage you if you haven’t sat at the table and allowed the Lord to restore you because of past shame to… Sit down. Let Him ask you the questions and give you the restorative answers that you need. Those answers will endow you with power and cause healing virtue to flow through you once again. To the imperfect, fierce and feisty disciple, I write… Get up. Be thou restored and let us continue to follow hard after Jesus. We can and will be restored… We’ve got work to do.

Ronda has a knack for infusing great music with great verse! She is a single mother, a writer, a minister, a sister, a daughter, and a friend… but most of all, she is a child of God. She is His perfectly imperfect proof that broken things, battered things, and seemingly unusable things, can be revived and restored. The life God has breathed in her to revive her broken pieces is spoken through her poetry and books with the hopes that the hearer will also LIVE. Her work is a testimony. Her gift is one she can’t take credit for, it is from the Lord, and her words are… HIS Desire, Her FIYAH!!!

5 thoughts on “To the Imperfect, Fierce, Feisty Disciple”

Beginning the day in prayer! Father, All that’s good and perfect comes from You. When we focus on Your goodness we can find peace that surpasses all understanding through Christ Jesus beyond our darkest moments. You are the source of our contentment. In Jesus’ name, Amen
#wtsys