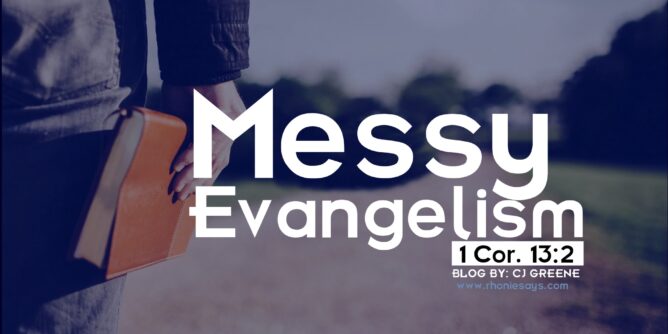 And if I have the gift of prophecy [and speak a new message from God to the people], and understand all mysteries, and [possess] all knowledge; and if I have all [sufficient] faith so that I can remove mountains, but do not have love [reaching out to others], I am nothing.

I remember having this debate with an Atheist one day, and his response to my efforts in trying to convert him was that there is no meaning in life. We are all just wondering in space. It was one of those moments that I wasn’t really prepared for. I wasn’t ready to evangelize an individual who did not believe in the possibility we are all destined by God to do something in this world.

Hearing his response, we are all just floating through space as mere spectacles of stardust were beyond morbid. It was hopeless! And when I looked at him, it sent shivers through my soul because I knew he wasn’t the only person in this world that thought like this.

One of the issues I had with my evangelizing method was not reaching the core of people’s problems and issues but just trying to shove a gospel script down their throats and convincing them somehow they are “saved” by repeating “My Words.”

The lack of connectivity with other human beings made my evangelism close to being sociopathic. Was I really concerned about non-believer’s souls, or did I prejudge them and qualified them for hell? And thus, I needed to intervene with all of my “Christian powers” and “self-righteousness” and try to save them from a terrible eternal death?

I don’t use the word sociopathic lightly. And by no means am I covertly suggesting that other people who may evangelize the way I did are sociopathic as well. This is just a very genuine self-reflection of my personal experiences and how I viewed myself doing this.

Well, let me at least define sociopathic and what I mean by it. It is the lack of regard for other people’s feelings and emotions. Using wit and charm to manipulate people for personal gain.

What I mean by my style of evangelism as sociopathic may not fit the full definition of what a true sociopath is, but rather? Absolutely! And here is why:

Evangelism is meant to spread the good news of Jesus Christ, but what I was doing was trying to get people saved. Spending 120 seconds with an individual and getting them to repeat words thinking they will be saved for the rest of their eternal lives, was my own delusion.

There are legitimate questions and concerns about Christianity that I never addressed, even on the simplest of foundations. And the most basic foundational questions are: Why do we exist, and what do we exist for?

One of my exploits in evangelism had me out in the middle of the night praying for people. I remember one homeless person said something compelling, “People don’t need you praying for them all of the time. They need you to feed them.” I had it in my mind that I was feeding the homeless on certain nights and praying for them on other nights and boy was that completely wrong.

It wasn’t until this point that I realized it is hard to hear a prayer about salvation when you haven’t had a decent meal in three days. And why do I have to control when they are fed and when they are prayed for?

It’s like having an agenda to getting people saved is the most erroneous thing you can ever do. And I have seen this in other Christian circles. I wanted people to get saved based on my techniques, strategies, and blueprints that were used in the past. Never considering the people we are encountering are human souls that exist; they are just people who are lost that need to me to convince them of Jesus Christ.

You know people don’t need you to convince them of Jesus Christ. Spreading the Gospel is not a pitch. You are not selling the Gospel. You are sharing it. And you are connecting and building relationships with people who have eternal existence and natural existence.

With that existence comes their pain, struggles, misunderstandings, and their hunger (both spiritually and physically).

It was that night I truly understood what it meant to be comfortable in a personal Christianity that only served your needs and forgot about everyone else. Even the attempt at doing something “good” was still selfish and ego-centric.

The inhumanity comes when you are trying to fulfill “your calling” and gain favor with God at the expense of using people to do it. Using every person as an opportunity to prove to yourself or to others that you are somehow “anointed” or “special”.

In every instance of Jesus serving those who needed his help, He was touched by their humanity. He connected with all that it was meant to be human and yet was still God enough to pull them through. That’s love.

What is it about certain parts of our Christian walk where we are not human enough to connect with the pain of others? What is it about ourselves where we do not wish to tread the unbearable places in other people’s souls and walk them through hardships with no benefits or rewards in the end?

What if our Christianity was not to be less human but to be more human? Not carnal where we serve a nature that constantly wants to sin, but rather, to be more human and connect with others for the benefit of the Kingdom of God!

What does it mean to be human and to be Christian? How do we exist with both of those mental frameworks?

They are not dichotomous. They do not conflict with each other. Yet we must learn how they coexist without compromising the values they both hold true. The effort and raw honesty that was put into this blog is not to bring a valuable solution but hopefully/prayerfully start a conversation. How can we be human enough to connect with people and guide them along their journey as Christ would do? How can we lose the inhumanity in “self-righteousness” and truly lead people to Christ? How can we show more care to those who are hurting and sit there with them and help them through it?

I hope we can find an answer for the sake of those who are hurting in the world that needs us!

Until next time my friend!

CJ is a follower of Christ Jesus who travels the world with his beautiful wife Samaria Greene preaching the word of God and training up lay members of the Body of Christ in Prophetic Prayer and leadership development.

He and his wife are therapists in the state of CT and are working towards opening up a Christian Counseling Center. CJ Greene focuses on missionary work in the nations of the world bringing not just the Word of God but a change in communities to empower those who are disenfranchised, oppressed, and deprived. To reach CJ Greene you can email him at greene.cjay@gmail.com