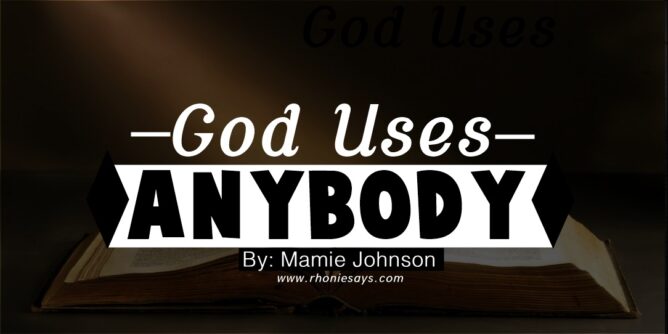 Then Joshua son of Nun secretly sent two spies from Shittim. “Go, look over the land,” he said, “especially Jericho.” So they went and entered the house of a prostitute named Rahab and stayed there. The king of Jericho was told, “Look, some of the Israelites have come here tonight to spy out the land.” So the king of Jericho sent this message to Rahab: “Bring out the men who came to you and entered your house, because they have come to spy out the whole land (Joshua 2:1-3).”

People who have a love and fear of God can make an impact in the world. They are found in the most unlikely places with occupations that would turn heads in today’s environment. Rahab was one such woman. She was a prostitute living in the city of Jericho. And those of you who have read your bibles realize that Jericho was the first city of Canaan of the territories that God’s chosen people would conquer. When Joshua sent spies out to observe the land it was Rahab the prostitute who hid them so that they could escape successfully. Ultimately it was her belief in what she had heard regarding the God of Israel and her courageous spirit in hiding the spies that saved her life and the life of her family.

Don’t be so quick to label others because they are not like you. God uses all kinds of people to carry out His plan. Rahab the prostitute became Rahab the rescuer and one who through the grace of God shared in the lineage of Christ!

God can use anybody and He doesn’t throw people away. His number one message is love and it is a love offered to everybody. Seek to embrace all humankind with His kind of love.

Mamie is a licensed and ordained minister of the gospel and holds a Bachelor of Science degree in Business Management from the University of Phoenix and a Master of Arts degree in Theology from Xavier University in Cincinnati, Ohio. Mamie serves as the founder and President of MJ Ministries Inc. a 501(c) (3) ministry that offers programs that lead and support individuals seeking to overcome adversity and live a better and more meaningful life through developing a relationship with Christ, is the Assistant Pastor of Jubilee Community Church in Springboro, Ohio, a Facilitator at United Theological Seminary, and an author, a chaplain, and conference speaker.  She is married to her husband Fred and has two children, a daughter-in-law, and two grandchildren.