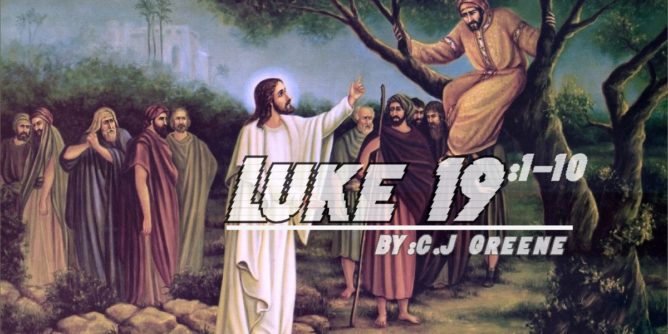 Tells the story of Zaccheus, a chief tax collector that the Jewish people hated. He was a short man, and upon hearing the teachings of Jesus Christ, he changed his life around. The Luke story of Zaccheus tells how, he ran in front of the crowd towards a tree and climbed it, to see Jesus walk by. Jesus spots Zaccheus in the tree and tells him he is going to visit his house. There are some keys we can learn from Zaccheus that will help us to change our lives around if we can pay attention to them.

Here are three quick keys that will help you gain a new perspective in life and ministry.

1.    Don’t curse your limitation but understand it.

Zaccheus understood he was a short man and because he was short he had to think outside of the box to get a better view of Jesus walking by. What is important in this story is Zaccheus didn’t give up because of his limitation of being short but instead thought of ways to see Jesus despite his limitation. His limitation of not being able to see above the crowd, caused him to think in new ways that would assist him in achieving his goal.

Believe it or not, everyone has limitations. Everyone has some type of disadvantage. The key is not to be discouraged by your limitation but rather to accept it. Looking at Zaccheus, he didn’t have time to be mad about how short he was, he only had time to think outside of his limitations. The more we focus on being upset, discouraged, disgruntled, or being mad about our limitations or our flaws, is time we could have spent thinking beyond them. Zaccheus shows us not how to give up because we have limitations but rather to accept it, embrace it, and think beyond it.

Thinking beyond your limitations requires ingenuity. My prayer of late is, “Lord give me a mind of ingenuity”. Ingenuity and resourcefulness will allow you to succeed in places where others fail. Zaccheus didn’t have to cry louder, didn’t have to be stronger to push everyone away to get to Jesus, he just had to outsmart and outmaneuver everyone to get to Him. The woman with this issue of blood barely crawled to get to Jesus because on the floor there isn’t as much traffic. The friends who opened up the roof to rope their lame friend down to Jesus were shown to have much faith because no-one else thought of it. Ingenuity has its reward.

Limitations doesn’t mean disqualification. Because of his limitation, Zaccheus had to think before the crowd. Many times it is the limitation that separates us from the crowd that makes us have to think before what the crowd is going to do or where the crowd is going to be. Zaccheus wanted something very important to him and that was to have a fresh perspective of Jesus. The man that changed his life. To do that, he had to separate from the crowd by anticipating where Jesus was going.

Limitations will increase your anticipation of what is next. It will make you aware of what the next steps are. Don’t waste time thinking about how you don’t fit in the crowd, but rather think where the crowd is going and beat them there.

It is at this moment we see Zaccheus leaning into his limitation, embracing the humble moments that it brings to get an advantage to see Jesus. Limitations don’t limit you, they teach you how to have better perspectives. Being like the crowd puts you in as one in a number. But embracing your limitations, helps you to think ahead and above the crowd.

One of the things that I like the most about Zaccheus is that he didn’t care what people were going to say about him. Many times we get so caught up about what the crowd is going to say, and if we are accepted in the crowd or not. In this case, to get the fresh perspective of Jesus, Zaccheus had to think the opposite of what the crowd was doing and thinking. The crowd said he was a chief sinner and he was hated, knowing this didn’t stop him. Knowing this didn’t stop Jesus from accepting him.

Herd mentality will have you conforming to the crowd instead of anticipating where Jesus is going.

Zaccheus knew he was never going to be accepted in the crowd and what was most important wasn’t the crowd, but rather Jesus who was leading the crowd. It’s not the acceptance that we should be after, it’s the perspective. Zaccheus revealed to the crowd that even a sinner like him will be accepted by Jesus. But most importantly, Jesus responds to ingenuity and desperation.

Zaccheus showed a level of desperation to see Jesus that was separate from the crowd. He went above and beyond to see Him. And that is what got Jesus’ attention.

I believe ordinary is not going to cut it any longer. I believe God is calling for the radicals to rise. Those who are willing to humble themselves and go above and beyond the current state of the crowd. Going where Jesus is headed and not where Jesus has been. Thinking beyond their limitations but using their limitations to propel their ingenuity to think outside of the norm.

My prayer is for the releasing of radicals for Christ. Those who are willing to break away from the herd mentality and begin to embrace the thing God is doing and is about to do. People not afraid to ignore the crowd who would use their past as a way to disqualify them, but rather embrace their limitations, embrace the mistakes of their history, and still use that as fuel for their desperation to see the LORD in a new way!

CJ Greene is a follower of Christ Jesus, who travels the world with his beautiful wife Samaria Greene preaching the word of God and training up lay members of the Body of Christ in Prophetic Prayer and leadership development. CJ Greene focuses on missionary work in the nations of the world bringing not just the Word of God but a change in communities to empower those who are disenfranchised, oppressed, and deprived. To reach CJ Greene you can email him at greene.cjay@gmail.com