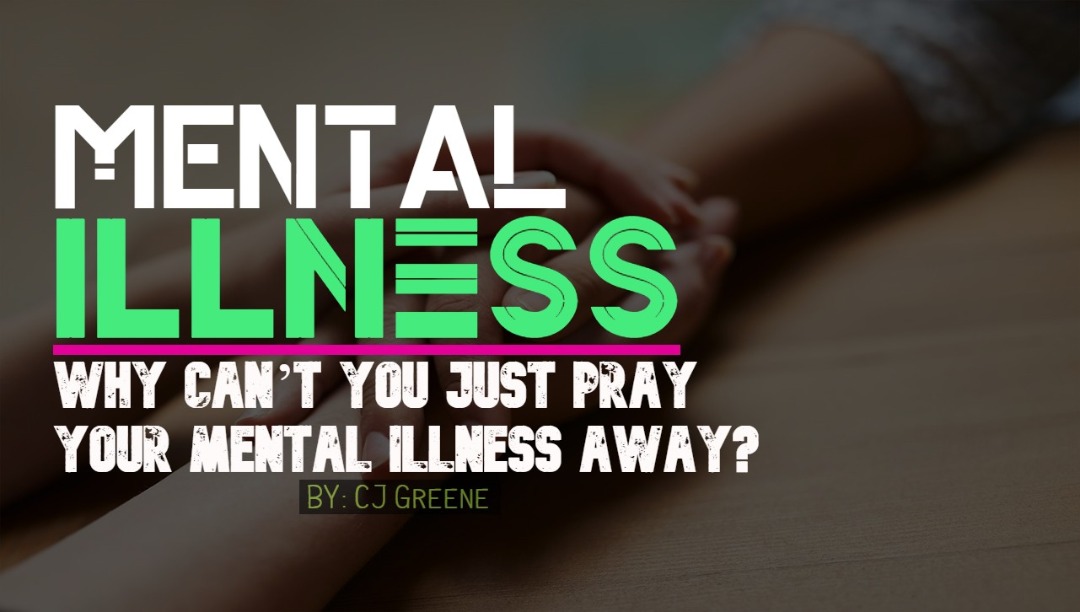 Mental Health has become the buzzword this past decade. With more attention towards it every day, we are seeing more people coming to an understanding that most of our adult problems come from unresolved issues that may have had its genesis during some type of childhood trauma. It is interesting as we become more aware of what mental health is, and how we solve the problems that exist inside our heads, one thing is clear, some mental health issues you cannot just pray away.

My wife and I are both therapists, and she has seen the dark side of mental health from a clinical point of view for her entire career. And for myself, I have seen it first-hand. Both personally and within the family. Coming from a Christian background, we grew up thinking everything was the devil, and depression or anxiety was nothing different. Being a leader in the church, I have also prayed people’s anxiety away, their depression away, or even any signs of psychosis. What I failed to realize is that it is not an either-or situation. It’s either the devil or its mental health, I didn’t know I was so wrong in my singular and closed-minded conclusion that it was either-or until I became a therapist.

My wife is a firm believer in mostly all mental health issues stem from some sort of trauma that has never been addressed. It took me a long time to realize she was right. Most of what people deal with in therapy with me is unresolved issues they have failed to reconcile. It’s quite simple almost, imagine if you broke your foot as a child and your parents didn’t take you to the doctors to get it checked out. Instead, they put a wrap on it and told you everything was going to be alright. They gave you a hand-me-down crutch or cane for you to walk for a few weeks, and relied on your body to naturally fix itself. Now, without it being properly taken care of, that foot is going to grow, but it is going to grow awkwardly. The foot will be malformed, and you will more than likely have a funny way of walking because the foot never grew correctly from the fracture. Now that you are an adult, you have a funny limp, and you may never tell anyone, but you are starting to have extreme pain when you walk because your weight was never supposed to be carried on a malformed foot. So you have back troubles, knee troubles, ankle troubles, and feet problems all because your foot was never properly healed when you broke it.

Now that you have a limp and you have chronic pain, should that be considered the spirit of infirmity, or is it there because of the mismanagement of health?

What most people do not realize is, trauma brings a fracture to the mind. It causes the mind to see the world differently from the brunt force that had impacted the soul. Many people fail to get the proper help they need during the time of trauma, and because it is not physically seen, it is very easy to allow the soul to heal on its own especially if it is something that can be “swept underneath the rug”.

A fictional story of trauma centers around a girl who was molested by her father for years. She didn’t want to tell anyone about the issue because she was so embarrassed, and she thought it was her fault. From the indiscretion, she developed coping mechanisms that allow her to imagine herself outside her body and develop a new personality that can tolerate the constant abuse by her father every night. When she went to tell her mother, her mother denied the allegation, slapped her daughter and told her she should stop imagining things.

After her father died when she was 16, she began to develop more maladaptive practices. She became promiscuous, quick-tempered, poor time focusing in class, argumentative with her mother, fighting teachers, sleeping with older men, and now she is starting to self-medicate by smoking marijuana in which she is developing an addiction.

She is growing older, but her soul is still caught in a time trap to when she was being abused by her father and is acting out the trauma in the only way she feels comfortable. Now, do we consider that demonic or the mismanagement of mental health?

The biblical verse that states we must renew our minds daily (Ephesians 4:23), is a pivotal point in the mental health field, especially when it comes to the sphere of Christianity. Everything bad isn’t the devil, which is news to some. And to others, they know many of the things they are dealing with is based on issues they never received help for.

I am a firm believer in the charismatic practice of casting demons out through the name of Jesus Christ, and I am also a firm believer that a lot of people dealing with mental health issues need healing and mind renewal, not an exorcism. There is a stark difference between being oppressed by the devil because you opened your soul to the kingdom of darkness and being oppressed by your thoughts because you do not know how to properly reconcile your trauma.

Many people need real counselling to help them sort through their issues. Some issues are not going to be miraculously be dealt with by God especially when there are issues in the soul. Trauma to the soul will distort an individual’s world-view, the perspective of themselves, perspectives of others, and their perspective of God. I have always wondered how individuals in the church can assume the posture of being delivered but fall back into iniquity days later. After talking to a few individuals, it is because their ability to see the world and see God according to His truth has been distorted because they have an issue in their soul that needs to be reconciled and renewed.

I remember praying for people who were always fornicating. One week they are in the prayer line, they are remorseful of their sin, they surrender their lives to Christ, only to find out that later they were back in the bed of fornication. After speaking to some of these individuals, some of them have been molested and abused as children. The only way they can find comfort during stressful times is through sexual interaction. Now, when those individuals come up for prayer, it isn’t God deliver them from fornication, it is more like God heal them from the trauma that has happened when they were children. Afterward, we offer them the ability to see a counsellor to help them deal with what has happened in their past and to properly address and rectify it.

Mental health issues are a very broad subject, and cannot be treated singularly. All mental health issues are not created equal, and many of these issues were born from trauma. Praying away mental illness is like asking someone to pray away a headache when in fact they need to be healed from a brain tumor. It is easy to demonize things we do not understand, and it is easier to spiritually bypass illnesses and pray for their disappearance than to investigate what the root cause is. I believe we are embarking upon a new journey in Christianity where more broken people are looking for help and healing, and prayer is not going to be the simple solution any more. Pastors and spiritual leaders will have to address mental health issues appropriately by providing divine counselling that will bring healing and restoration to those who are broken, and not taking the easy route by praying it all away with a simple prayer.

CJ Greene is a follower of Christ Jesus, who travels the world with his beautiful wife Samaria Greene preaching the word of God and training up lay members of the Body of Christ in Prophetic Prayer and leadership development. CJ Greene focuses on missionary work in the nations of the world bringing not just the Word of God but a change in communities to empower those who are disenfranchised, oppressed, and deprived. To reach CJ Greene you can email him at greene.cjay@gmail.com

2 thoughts on “Why Can’t You Just Pray Your Mental Illness Away?”

Beginning the day in prayer! Father, Your mercy is great because You love us so much. While we were yet sinners You sent Your son to redeem us. How can we ever doubt that love? We are saved by Your grace which You freely extend to us. How marvelous! In Jesus’ name, Amen
#wtsys